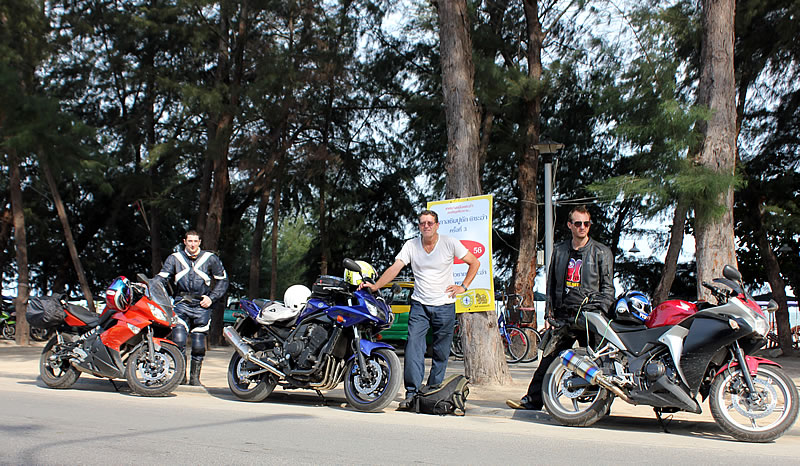 Three intrepid riders met up at Starbucks in downtown Hua Hin early one Saturday morning, the satellite image looked clear and routes were punched into phones, we were riding to Pattaya, some 350 kilometers round the Gulf, for the 2013 Burapa Bike Week. My initial worry was being able to keep up with the other two bikes, a Yamaha Fazer 1000 and a Kawasaki Ninja 650, which were considerably more powerful than my own 250 Honda. We decided our cruising speed would be between 120 and 130 which my bike could handle.

A quick stop to check tire pressures and we were on the road heading for Cha-am. Tom took the lead on the Yammy, myself in the middle, and the Ginga Ninja bringing up the rear. First quick break was just beyond Petchaburi where I had to fill up, and then it was on to Bangkok. Since you cannot take bikes onto the express ways in Thailand we had to navigate through the hazy clogged city, over the river via a ten baht ferry crossing, and out the other side. As expected the traffic was pretty hellish and we started to cook in our heavy leathers. 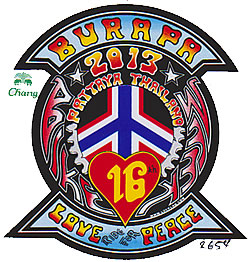 Some excellent navigation took us to Phra Pradaeng where we rode straight on to the waiting ferry, on the other side we found highway 3 which took us along the coast to the Chonburi expressway. This road wasn’t the best since it is single lane, loaded with lorries and in poor shape. We stopped outside Chonburi where there was a noticeable increase in bikes on the road.

The final leg into Pattaya was plain sailing, until we hit the Pattaya Klang road which was gridlocked – it took almost an hour to get from Sukhumvit into central Pattaya to find some accommodation. Aching butts abound we had arrived, approximately 6 hours after leaving Hua Hin. A lot of the accommodation was already full, the town was heaving, so we finally found a decent place in a soi off the second road for 990 per night with pool and breakfast. It was time to take a well-earned shower and work out how to get to the bike meet which was another 20 kilometers south apparently.

The Pattaya (Burapa) Bike Week is billed as one of the largest in Southeast Asia attracting riders from across the region. It was being held at a place called Silverlake, around 20km south of Pattaya, the reason for this was evident when we arrived – it was HUGE. I have been to a number bike weeks in Thailand over the past few years but the sheer scale of this event was mind blowing. We arrived before nightfall so could take in the vista; tents, teepees, stalls, stages, classic cars, bikes, and more bikes for literally as far as you could see.

Every kind of two-wheeled machine was present from Vespas to Harleys, Triumphs to Ducatis all spread over an immense area. Many had ridden a lot further that us so had setup camp at the venue, a smart move and one I’ll consider next year!

The return journey was a lot smoother since we could take the highway almost all the way to the ferry in downtown Bangkok. This only took an hour and a half since traffic was light. Through the city and a pit stop at Samut Sonkhram for lunch where we decided to take the coastal road through the salt farms all the way to Cha-am. This is a much quieter scenic route away from the tailgating speed freaks in their over-powered pickups on the highway. The journey took about an hour through a part of Thailand that tourists seldom see. 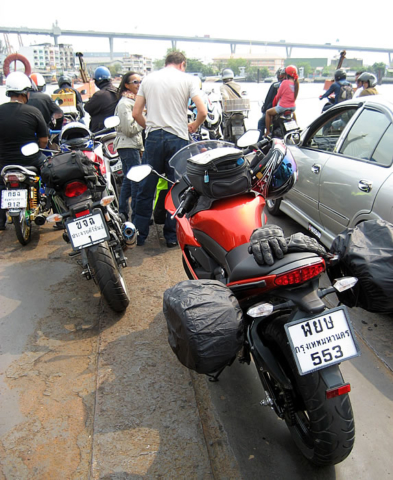 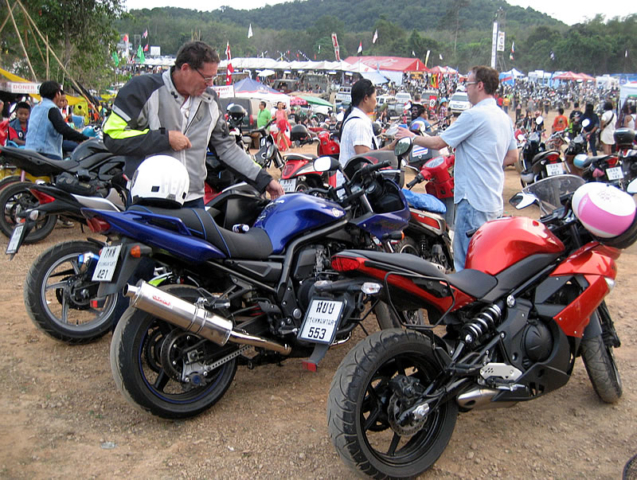 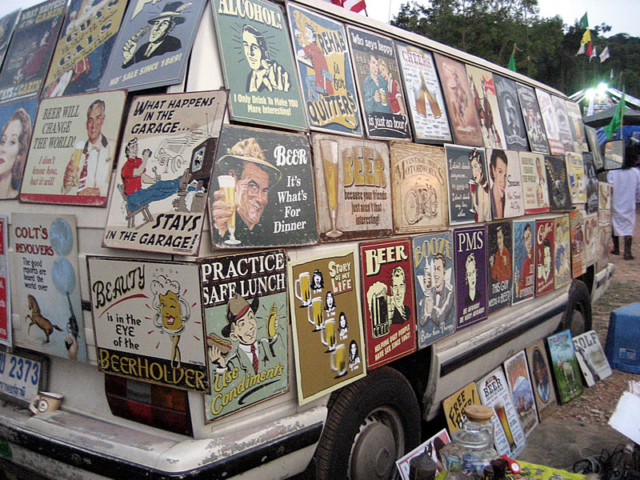 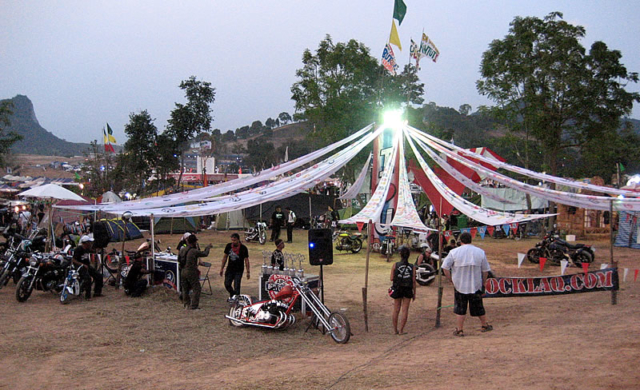 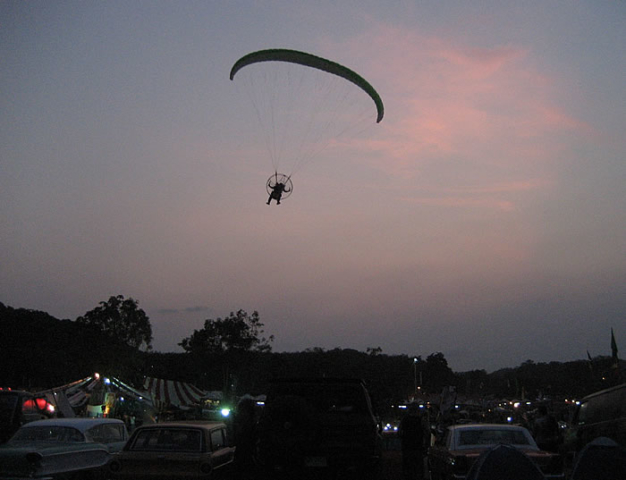 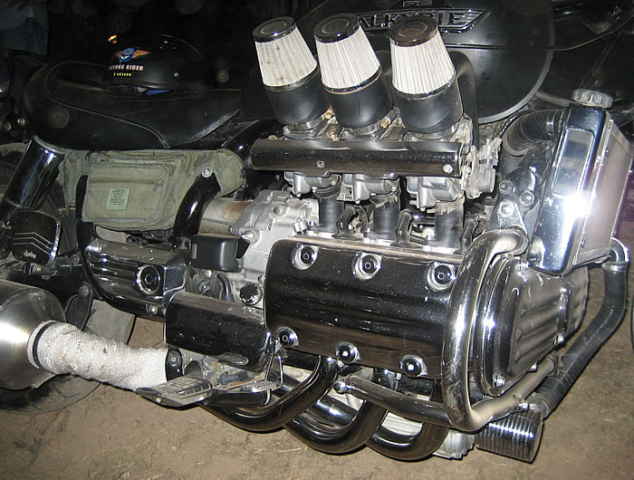 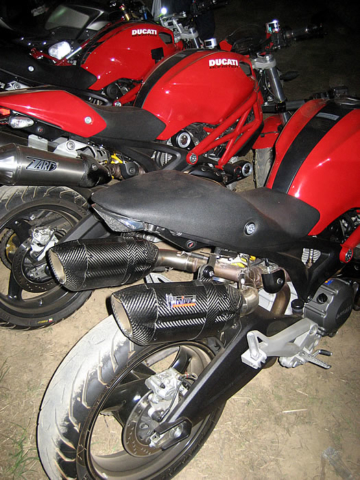 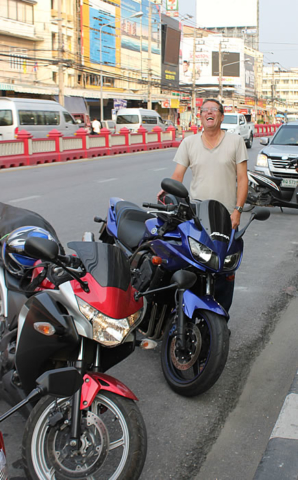 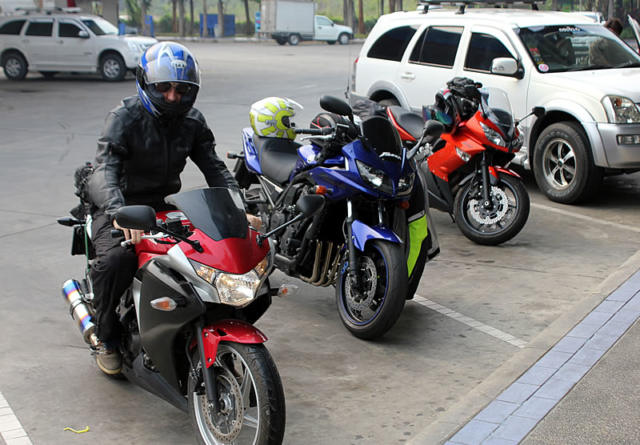 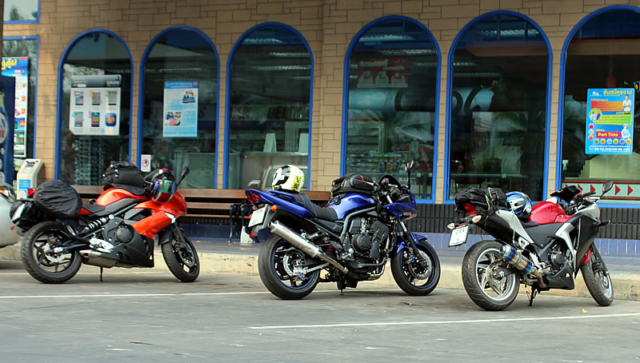 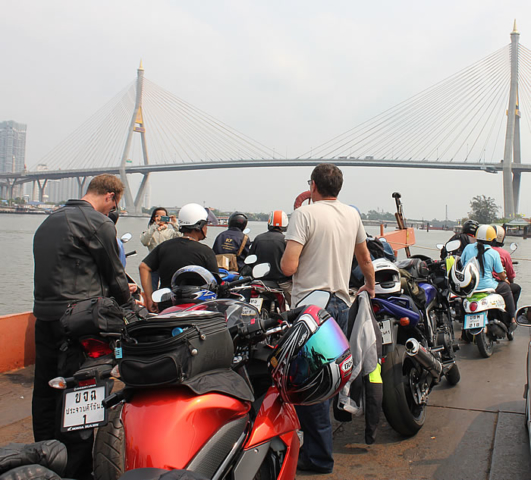 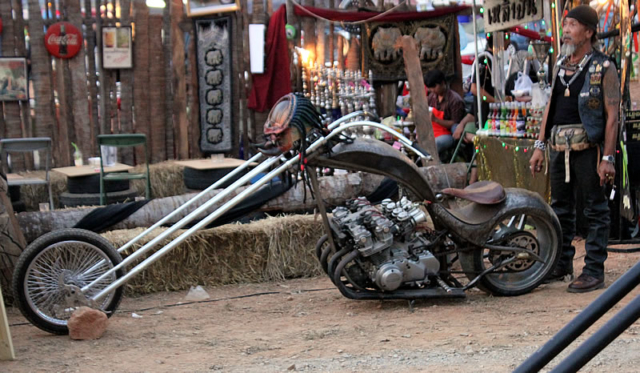 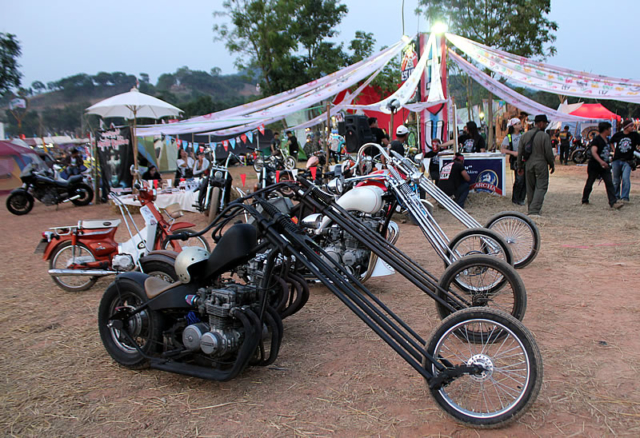 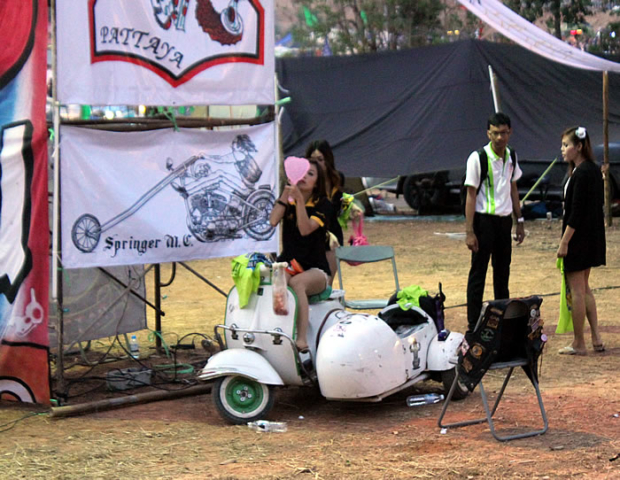 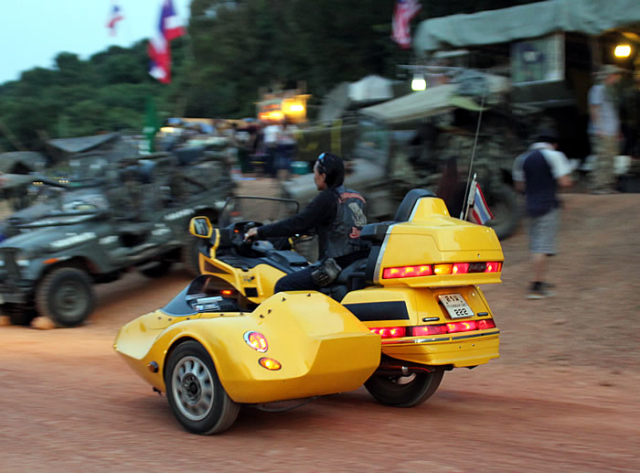 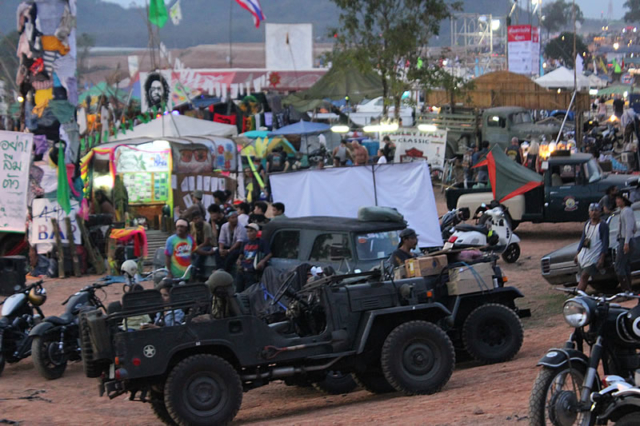 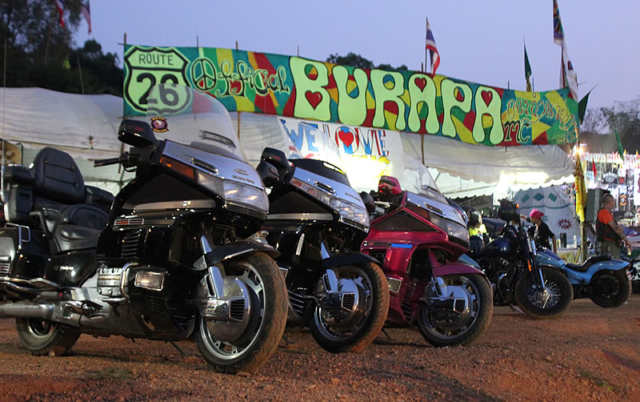 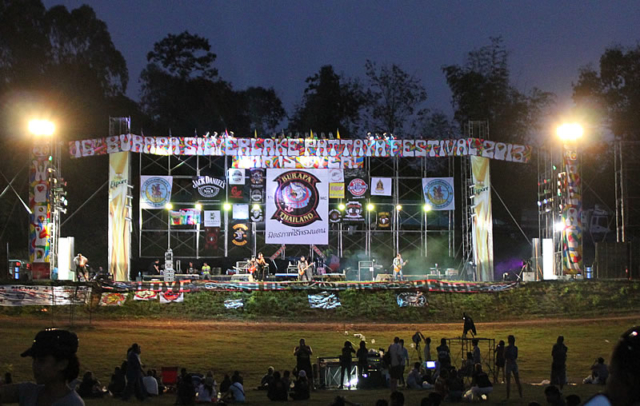 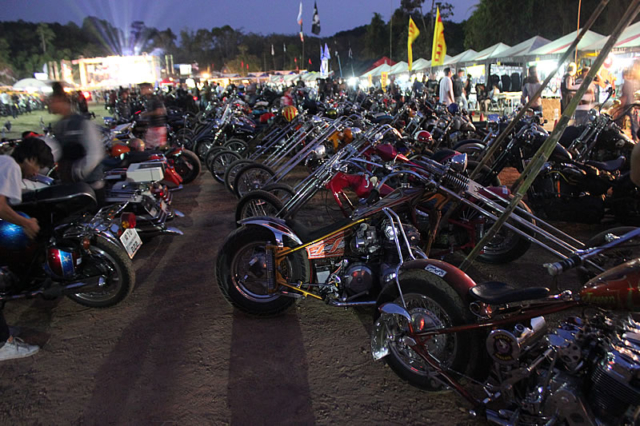 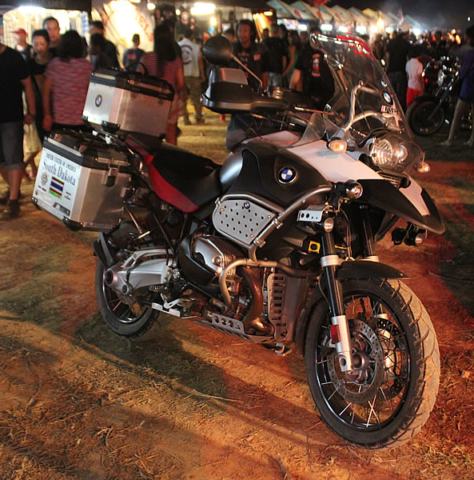 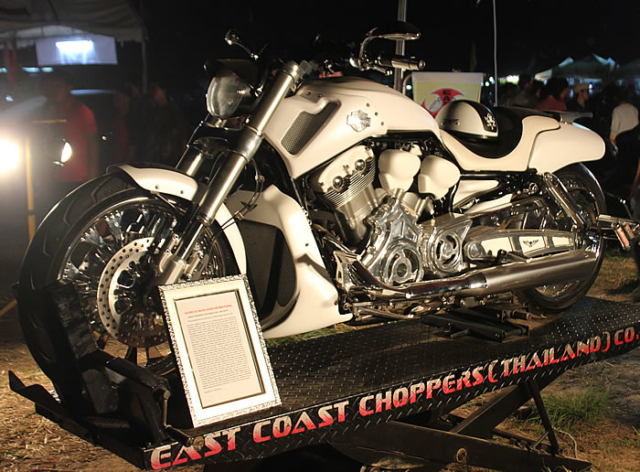 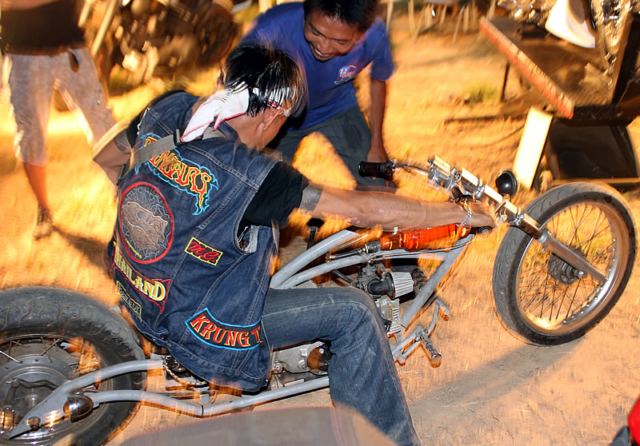 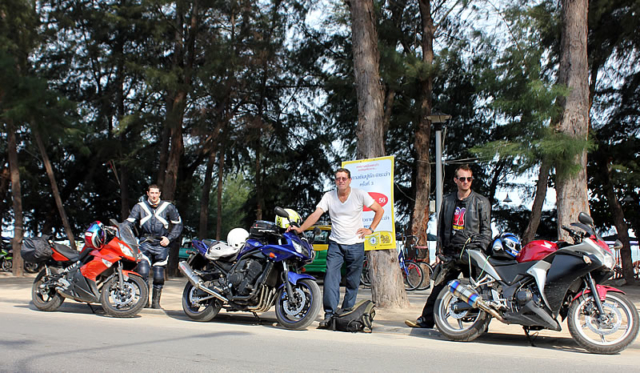