On The Road Asia > Other > A guide to riding in Thailand

A guide to riding in Thailand 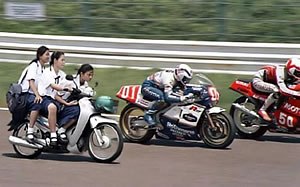 Riding a motorcycle in Thailand isn’t for everyone, however vast numbers of visitors to the Kingdom do it at least once during a trip and a large portion of these limited experience bikers end up getting too friendly with the asphalt. Road rash victims are a common sight in any Thai hospital.

There are a number of basic premises and guidelines to follow on the roads in Thailand and by doing so your two-wheeled experience will be a pleasurable one. First and foremost wear a helmet, your head is worth more than the 200 baht fine you will get if the police catch you. It is also law that you drive with your lights on, this theoretically increases your chances of being seen by other road users. 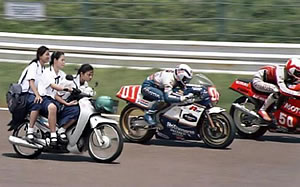 Dangers and annoyances
Thai people are generally very laid back and friendly where time is of little consequence, this changes though when they get behind the wheel and instantly transform into lead-footed racing drivers without a second to spare or a care for anyone else on the roads, me first is the mentality in a car. Speed without a doubt is the biggest cause of accidents on Thailand’s roads, according to current UN and WHO research it is ranked 2nd in the world for fatalities caused by road traffic accidents. Ride at a sensible speed regardless of what the rest are doing.

Other local motorcyclists generally have little or no respect for the roads or regulations so it is your job to avoid them. They will come at you from all angles and usually abide by the premise that the larger vehicle has right of way. One particular annoyance is motorbikes driving down the wrong side of the road, make sure you look out for them when attempting any manoeuvre. Often they will turn or pull out without even looking or signalling, be prepared for them to do something dangerous and you wont be surprised!

Dogs are a major danger to those on two wheels and Thailand has millions of them, most of which are feral street roamers. Many a rider, experienced and otherwise, has kissed the concrete due to a dog running out at them. There is no real solution to this one, just try and temper your speed and be aware of them. 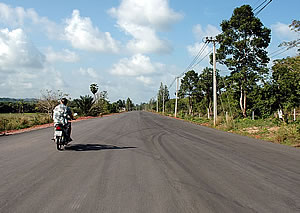 Road conditions are variable and range from great strips of pristine black top to sections that resemble the surface of the moon. Craters, potholes, cracks, and bumps are common on many Thai roads, ride with caution and assess the road. Loose gravel is also very common on smaller roads, go easy on the brakes when you see it.

Highway riding
Riding on Thailand’s highways can be particularly hazardous unless you are in a large group. The greatest danger is slow moving trucks and buses pulling directly into your path without looking to overtake a slower moving vehicle. If you are on a smaller bike and are in the left-hand bike lane watch for other vehicles pulling out on you, also without looking, or driving up the wrong site of the highway. Tailgating is also very common here, best to let the speed freaks in their over-powered pickups go by.

Unregulated U-turns are a magnet for accidents as traffic pulls out into a fast moving highway, often with little regard of what is approaching and at what speed. Be extra alert when approaching a U-turn and if turning in one give way to what is coming, also watch for vehicles driving up the wrong side of the road while making your turn. U-turns are a danger across the country on all roads since cars and pickups are above bikes in the pecking order so will often simply pull out regardless of you approaching them.

Signals
Contrary to the west, flashing the headlights actually means get out of the way, I have no intention of stopping or moving for you – you will see it often. When approaching an intersection vehicles that turn on their hazard lights generally do so to indicate that they are going straight ahead. There is absolutely no general courtesy on the roads here, nobody will wait or let you go, which is why vehicles simply pull out – it is either that or sit there all day waiting. Locals will just smile sheepishly at you if they have almost caused an accident by pulling into your path. 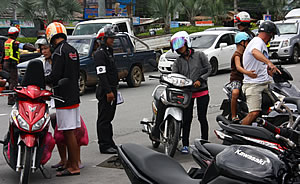 The law and police
The law of the road in Thailand is actually quite similar to that in the west, it is based on UK road law. The problem is that none of the laws are enforced so there is no incentive to obey them – people drive how they like because they can. Traffic police are underpaid so tend to do as little work as humanly possible aside from the odd road block to nab motorcyclists without helmets or check for licenses. In the tourist towns such as Phuket, Pattaya, Hua Hin and Chiang Mai foreigners on bikes are generally targets, seen as mobile ATMs, and the police will often fine you (on occasion well above the official fee) just because they can. Away from tourist hotspots and out on the open road the Thai police generally leave you alone. If you are stopped by the police the primary things they want is a helmet on your head and a valid drivers license (Thai or international), get your wallet out if you have neither, and maintain calm at all times – getting angry will only increase your hassle. 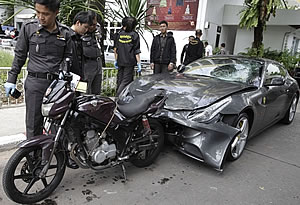 If you are unfortunate enough to be involved in a road accident there are a number of things you should be prepared for. The police will not help you, their job is to report the accident, clear up the mess and get rid of the problem as quickly as possible regardless of who was at fault. A foreigner involved in an accident will often be blamed for causing it regardless. Be prepared to stand your ground if you are in the right, do not back down and above all be polite and do not lose your temper. Motorbike accidents are usually cleared up pretty quickly with damages being paid on the spot for minor injuries and vehicle damage. Be aware that rental motorbikes are very rarely insured for accidents or theft so it comes out of your wallet if you come off.

It sounds scary but riding in Thailand is a rewarding experience if you keep the above in mind, seek out less trafficked routes and avoid the big cities and tourist traps.